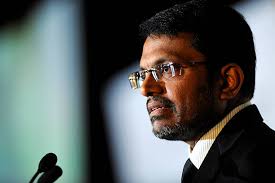 His words don’t carry a fraction of Fed Chair Janet Yellen’s power to move markets; nor do his actions possess the strength of Haruhiko Kuroda’s balance-sheet maneuvers at the Bank of Japan. He isn’t an intellectual in the mold of economist Andy Haldane at the Bank of England, or Raghuram Rajan, the former governor at the Reserve Bank of India. Yet this central banker from a nation of 5.6 million people, a policymaker who doesn’t even set his own interest rates or issue a currency that’s widely held overseas, is front and center of a revolution in global finance. Ravi Menon, managing director of the Monetary Authority of Singapore since 2011, is the architect of the most audacious makeover of Singapore’s financial system in 50 years. But unlike in 1968, when a newly independent Singapore merely wanted to be trusted with dollar deposits in the hours when New York was off to dinner and London slept, the game is different. In fintech, Menon isn’t just looking to fill a gap. He wants Singapore to shine a light from which even the West can draw regulatory comfort.